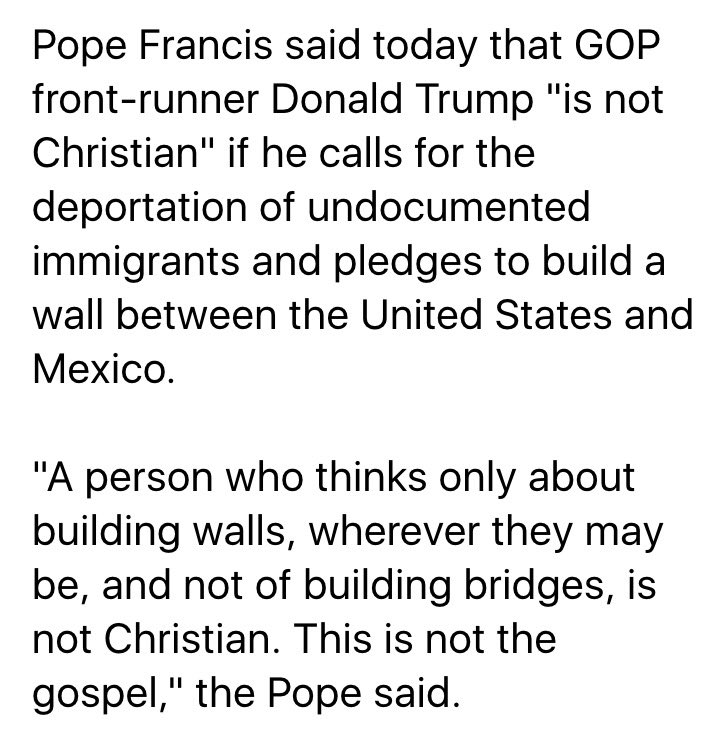 http://2d0yaz2jiom3c6vy7e7e5svk.wpengine.netdna-cdn.com/wp-content/uploads/2016/02/a45-300x161.jpg
Trump angrily responded to Pope Francis’ criticism by suggesting he’d be sorry for speaking out against him if Islamic State militants attacked the Vatican City.

The pope said Trump’s divisive rhetoric and proposal to build a wall at the U.S.-Mexico border were “not Christian” — and some fans of the Republican frontrunner accused the pontiff of hypocrisy.

rump has responded to Pope Francis, who on Thursday said the GOP candidate was not a Christian because of his comments about immigrants.

“If and when the Vatican is attacked by ISIS, which as everyone knows is ISIS’s ultimate trophy, I can promise you that the Pope would have only wished and prayed that Donald Trump would have been President because this would not have happened,” a statement on his website reads. “ISIS would have been eradicated unlike what is happening now with our all talk, no action politicians.”

Francis isn’t the only one to call Trump’s faith into question. Trump has bungled Bible quotes and verses in the past in efforts to charm religious voters.

Furthermore, characterizing undocumented border crossing as “rampant” flies in the face of reality, as immigration across the southern border is at a low and many of those crossing are fleeing violence, according to the LA Times.

Nevertheless, Trump has made talk about building a bigger wall — which he implausibly says Mexico will pay for — along the southern border his go-to crowd pleaser.

Francis stopped short of telling Catholic voters who to choose, but did say, “I would only say that this man is not Christian if he has said things like that.”