The American Music Awards show Sunday was a party to say the least – from host Jennifer Lopez showing a rarely seen side of herself to the amazing performances that kept the audience on their feet.

There were duets featuring the likes of Alanis Morissette and Demi Lovato, but the show’s finale was the hit of the night, as Justin Bieber closed with three songs, including one of which he danced in the rain.

On a heavier note, Celine Dion paid tribute to the victims of the Paris attacks, which had members of the audience in tears. It was a poignant moment during a night that was meant to bring people together to celebrate music and each other.

Here are the top moments from the show:

The host kicked the night off with an epic, 10-minute dance montage of the year’s biggest hits.

“Tonight’s not about me, tonight is about the music,” she said when she came out. “You all want to dance with me?”

She then danced to “Uptown Funk,” “Girl Crush,” “Bad Blood,” “Hotline Bling” and a slew of other hits. It even had Justin Bieber dancing in his seat.

Later in the night, Lopez got a bit emotional, explaining it was always her dream to be hosting the show when she was a little girl growing up in the Bronx. It was a side of J.Lo you don’t often see and it came through as genuine and candid.

Selena Gomez performed early with her hit, “Same Old Love.” She had the audience singing along, and also had a group of tap dancers behind her break it down toward the end of the performance. Next, the show switched gears when Carrie Underwood performed a very romantic version of her song “Heartbeat,” while wearing a very sleek red dress.

The night really took off when Demi Lovato took the stage to not only perform “Confident,” but later welcomed Alanis Morissette to join her for a duet of the 1995 smash hit “You Oughta Know” to celebrate the song’s 20th anniversary. It brought the house down.

Another jaw-dropping moment came when Meghan Trainor and Charlie Puth performed “Marvin Gaye” and made out afterwards while still on the stage. Luke Bryan, who won for Best Male Country Star even joked about the kiss during his acceptance speech.

It wouldn’t be a show without a performance by One Direction, who performed “Perfect,” followed by Nick Jonas playing drums and singing his song “Jealous” with a full chorus behind the pop star.

For the first time in seven years at the AMAs, Coldplay took the stage, singing “Adventure of a Lifetime” in front of a colorful mix of shapes and animation. The Weeknd performed shortly after in front of a fire show, then Luke Bryan was joined by Karen Fairchild to perform “Home Alone Tonight.”

Bieber closed the show with a three-parter of his songs “What Do You Mean?” “Where Are Ü Now” and “Sorry,” dancing in the rain.

“It’s been 20 years since Jeremy and I worked on ‘Clueless,’” actress Alicia Silverstone said, right before she and Jeremy Sisto introduced Gwen Stefani to sing her new song, “Used to Love You.”

In fact, Sisto talked about the then “up-and-coming” band No Doubt from back in 1995, Stefani’s former group that hit it big with dozens of hits over the years.

Gwen then performed “Used to Love You” in front of sad images of herself, and with lines like “I don’t know why I cry,” Stefani connected with the audience on a whole new level. Couples were shown in the seats, holding hands, gently singing along. Stefani recently announced that she and Gavin Rossdale were separating after more than a decade of marriage. She’s now dating country star Blake Shelton.

Before the show, it was announced Dion would be performing Edith Piaf’s “Hymne à L’Amour” in French in honor of the victims of the Paris attacks.

Before her performance, Oscar-winner Jared Leto gave a touching story about his band playing at the Bataclan concert hall a short while back, calling the venue one of his favorite places to play. He spoke about the senseless killing of more than 100 people, many more critically injured, just over a week ago and how it forever changed Paris.

“France matters, Russia matters, Syria matters … the entire world matters and peace is possible,” Leto exclaimed. “Many of us here are the sons and daughters of immigrants.”

Not only did Pentatonix, the hit a cappella group, perform the iconic score from the “Star Wars” movies, but a new scene from highly-anticipated “The Force Awakens” played before.

In the scene, Rey and Finn are running from an attack. After the short clip, fans stood on their feet for the legendary Harrison Ford, who paid tribute to John Williams, the composer of the “Star Wars” score.

As for Pentatonix, the band’s performance was chilling. The harmonizing of the score was incredible and the band was all decked out in Force-inspired gear. Then came the roar of the orchestra. Words can’t do the performance justice. 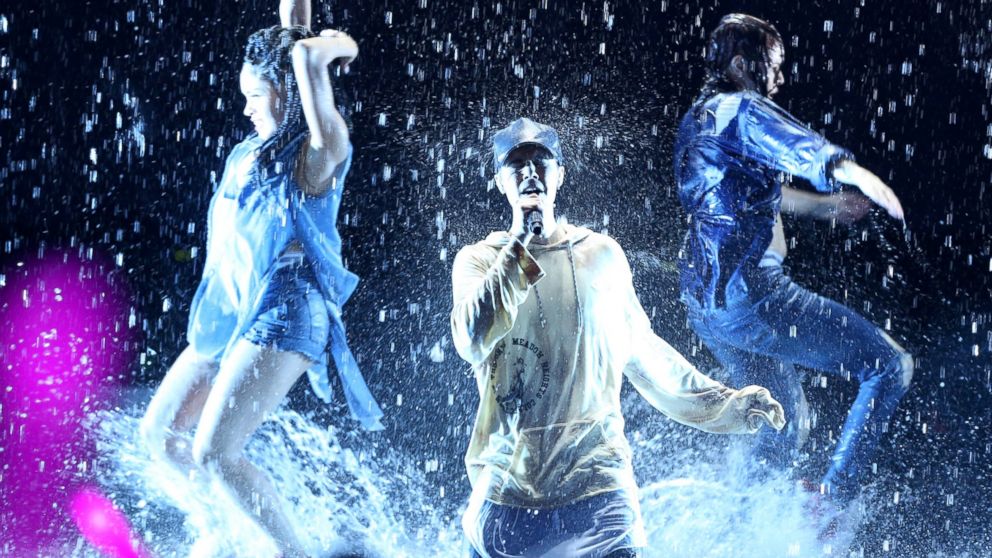 Sunday night's American Music Awards was a party to say the least. From Jennifer Lopez hosting the night to the amazing performances, no one in the audience stayed in the